Money can’t buy you happiness. You hear this all the time, but is it true?

The association between money and happiness is being increasingly examined by academic research. In 2010 a study by Princeton University found an increase in happiness as people’s income rose to $75,000 a year, then the impact of rising income on happiness levels off.

Carl Richards, from Utah, admits in his online blog to asking his wife “if your income doubled tomorrow, do you think you would be happier?”. Her response, after a long pause, was “I feel like I’m being set up, is this a trick question?”.

Carl has since asked many people this same question and most people seem equally conflicted and feel like they would be happier, but acknowledging it feels wrong. So why the conflict?

Part of it might be that being content with what we have is a good idea. Spending all your time wanting more, or thinking about how happy you would be if you just had “X” more, is a surefire way to be unhappy.

But maybe we are looking at the relationship between money and happiness the wrong way. Often when we think of money, we think of things like bigger houses, flashy cars and more stuff. That does not lead to happiness.

According to another article about money and happiness that ran in The New York Times in 2010, there is plenty of research suggesting that experiences, time spent with people we love, and memories of special events contribute significantly to happiness. In the article, Elizabeth W. Dunn, a professor in the psychology department at the University of British Columbia, commented “’it’s better to go on a vacation than buy a new couch’ is basically the idea”.

Professor Dunn and her colleagues also wrote a paper on the subject that can be summed up by the title: “If Money Doesn’t Make You Happy Then You Probably Aren’t Spending It Right.” 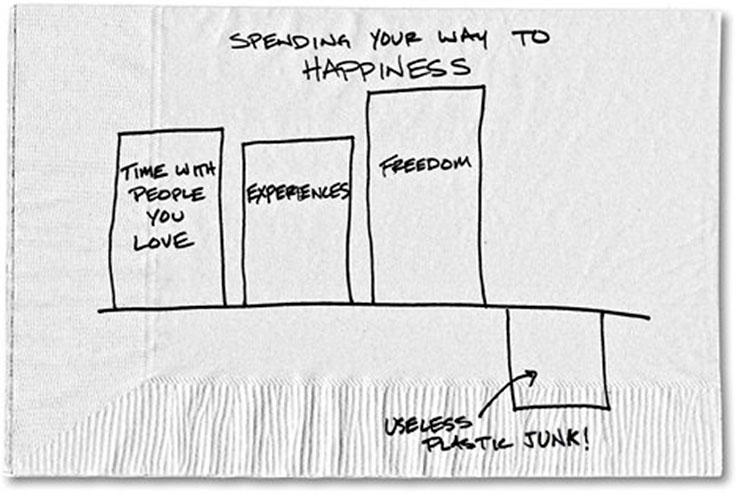