Be it ongoing banking woes in Europe, declining property prices or the slowdown in the resource sector, in many cases the financial media continues to paint a bleak picture of the investment environment. However there is an untold story of success starting to make itself heard amongst wise Australian investors.

The widespread reaction to continued volatility and negative media stories has been to retreat to cash or term deposits. This is evidenced by the unprecedented increase in Australian bank term deposits since 2006, best illustrated below.
While these investments feel “safe”, these same investors have been impacted significantly by the ongoing RBA cash rate cuts, which have resulted in income returns reducing by as much as 50% over the past 2 years.

This is in stark contrast to company profits and dividends paid to shareholders which have continued to recover and are now, on average, above levels achieved prior to the Global Financial Crisis in 2007. The following table shows the half-yearly dividends paid from the S&P/ASX200 index since January 2000: 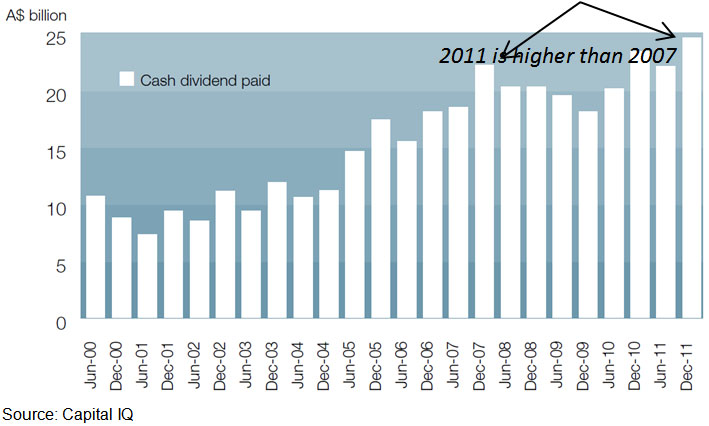 As a result of company profitability the dividend income returns (yield) from equities are now higher than term deposits for only the second time in 20+ years. The following chart shows the prospective yield of the ASX200 index excluding franking credits (which further enhances equities returns) compared to the “risk free” return of 10 Year Australian Government Bonds.

These results highlight the importance of not overly-focusing on capital values, which are widely publicised and discussed incessantly in the media. Given there is high liquidity in equities (i.e. can be converted to cash within 3 business days) market prices will always be volatile in short time periods. This is not reason to disregard the second, and arguably most important, dimension of return, being the actual dollar income stream generated over time.